Featured in the Media

Our top story this week looks at how an organisation is making sure Delhi residents have ample information about the green heritage they have inherited. 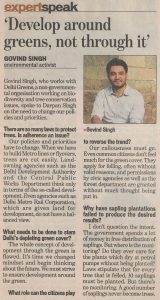 “Develop Around the Greens, Not Through it” – Hindustan Times

Govind Singh, who works with Delhi Greens, a non-governmental organisation working on biodiversity and tree conservation issues, spoke to Darpan Singh on the need to change our policies and priorities.

[ Click here to read the full story on hindustantimes.com ]

Power of Ideas – The Economic Times

Govind Singh, Founder, Delhi Greens, is a young environmentalist who is the face behind the Delhi Greens Urban Ecotours.

They take off on eco-caravans, cycle for change and represent India at climate meets. They are the young men and women who are taking the lead in whipping up opinion and lobbying the government into acting—fast.

Militant environmentalism? “No, I believe in practical environmentalism. So we don’t ask people to turn off their ACs, but tell them to go a little easy,” says Govind, a research scholar at Delhi University (DU)’s School of Environmental Studies and one of Delhi’s growing voices on the climate change.

[ Click here to read the full story on Indian Express ] 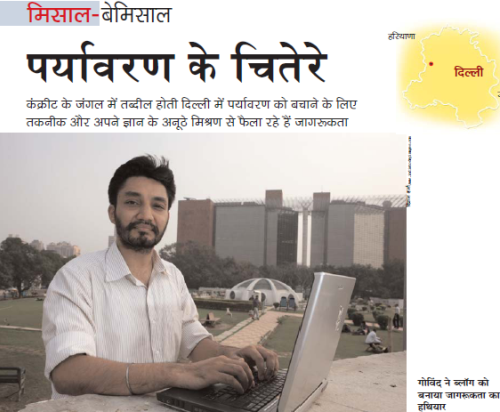 The new campaigners aren’t fiery radicals who demand that we return to a Garden of Eden world without automobiles and other energy guzzling machines. Most of them have carefully taken a middle-path to usher in change. “We want development to happen and at the same time reduce environmental degradation by adopting certain healthy green practices,” says Delhi entrepreneur Govind Singh.

[ Click here to read the full story on The Telegraph ]

Star Check: The Next Generation – 25 Youth Under the Age of 30 to Watch Out For – Time Out Delhi 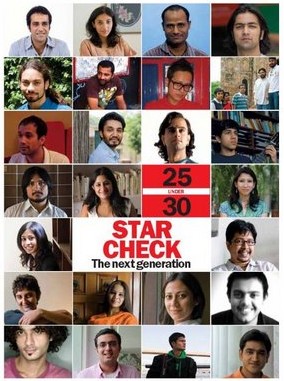 That a botanist would receive news of the felling of around 1,000 trees in Delhi with concern shouldn’t be surprising. But, since March of 2007, when all those trees were cut down in Delhi University’s North Campus, Govind Singh hasn’t exactly been wringing his hands. The Delhi Greens blog (www.delhigreens.com) was an outcome of the events of that month. That was a collaborative effort, and the blog survives. The organisation itself took shape and was registered in April 2008…….

……His vision for Delhi Greens is intimately connected with his plans for Delhi’s future. Down the line, he wants to be part of an “effective urban planning watchdog”, working to ensure that “the only development Delhi witnesses is sustainable”. He’s committed to Delhi in the long term. As he said of this city, “I simply cannot think of an alternative – that exists or may ever exist!” The good news is that he’s currently studying Environmental Studies, right here at Delhi University. He’s serving his apprenticeship where he hopes to work, and that can only be a good thing.